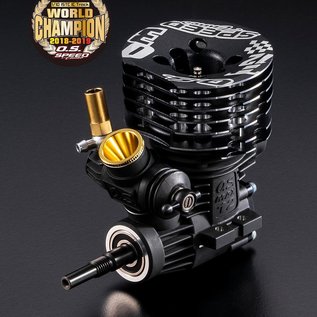 *AFFIRM Finance Offer Available on Total Purchases of $99 or More

The IFMAR 1/10 Engine Touring Car World Championships will be held from October 19 to 27 at Homestead RC Raceway in Florida, USA, and Naoto Matsukura, who uses the new OS SPEED T1203 prototype, will be a winner! Debut-to-Wine and OSSPEED have won the On-Road World Championships first victory. In commemoration of the OSSPEED on-road engine world conquest, Gold Reducer Limited Edition with 24K plating which is adopted also as jewelry for 5.5φ reducer comes up. As it is a special specification with limited quantity, please purchase as soon as possible.

The T1203 not only has significantly improved fuel efficiency compared to the previous T1202, but is also improved to be able to demonstrate its inherent power even on high grip road surfaces by increasing torque in the middle and low-speed range. In addition, in order to make it hard to be influenced by the temperature of the day, the outer head diameter is also changed, and the cooling performance is improved. This is OSSPEED's self-confidence work that I want the driver who seeks the power of 1/10 GP touring car to feel the feeling by all means.

Add your review
0 stars based on 0 reviews